YOU WON’T BELIEVE WHAT YOU’VE BEEN EATING 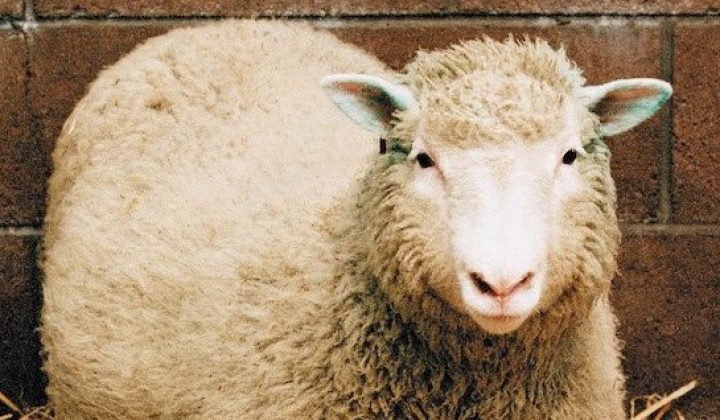 DISCLAIMER:  If you are still a consumer of animal products, what you are going to learn in this article may shock you.

Many of you may remember this history-making event.  Back in 1996, Scottish scientists announced that they had cloned their first mammal, a sheep named Dolly.

Finally… Man had succeeded in creating a Frankenstein genetically modified animal.  Was that a time to celebrate?

Now, regarding poor Dolly, she lived a painful, arthritic life and had to be put down prematurely due to her suffering at the age of 6.  A normal and naturally created sheep usually lives to be about 12 but due to the imperfections of cloning, Dolly met an early demise.

First, you need to understand what cloning actually means.  It is the process of producing a genetically identical copy of an organism.

Artificial cloning to create this exact copy uses an adult cell, rather than an embryo.  Remember, embryonic development is the “old fashioned and natural way” of life creation after an egg is fertilized.

But in genetically modified cloning, the nucleus of an unfertilized egg cell has been removed, and this adult animal cell is injected into the now-mutant egg cell.

The next step in this man-created animal process is to implant the Frankenstein cell into a surrogate mother.  Next comes a cloned version of an animal, never mind the suffering of the imperfections of man in the process.  Maye he’ll acquire Godlike abilities if he keeps being a mad scientist in this territory where he doesn’t belong, right?

This livestock cloning has been going on ever since Dolly arrived on the scene back in 1996.  Of course, industry immediately began seeking ways to capitalize on this new technology.  Follow the money.

Yes, there was plenty of opposition from animal welfare, consumer advocacy groups, environmental organizations, “some” members of Congress, and of course, many consumers.  But, to no avail.  Once again, the “powers” prevailed in the name of the almighty buck.

In January of 2008, our beloved U.S. Food and Drug Administration approved the sale of cloned animals and their offspring for food.

If your mind is starting to conjure up images that scare you in the night right now…  It should be.  It gets worse.

Because the FDA is so concerned about our safety (are you laughing?), they hired their own FDA scientist to write a report as the final word for consumer safety.  Issued in 2008, this FDA-funded report concluded that meat and milk from cow, pig, and goat clones, and the offspring of any animal clones, were just as safe as any food we eat every day.

As Stephen Sundlof, the FDA’s Chief of Veterinary Medicine stated, “Our evaluation is that the food from cloned animals is as safe as the food we eat every day.”

Never mind that researchers have noted severe deformities in many cloned animals, as well as a high incidence of reproductive, immune, and other health problems for these poor genetically modified creatures.

In fact, the FDA was so sure from their self-funded scientific report that cloned animals were so safe to eat that there are absolutely no requirements to label any of this meat or milk as coming from cloned animals or its offspring, whether sold domestically or abroad.

In other words, you have absolutely no idea if the meat or milk you purchase is from a real animal or a genetically modified clone.

Officials say they are not concerned about any impact on human health.  But…  But…  What about safety studies on the effects of genetically modified animal products on human health over the long haul?

Nah, why would this be necessary when the FDA paid-for scientific report said we had nothing to worry about?  Why bother with necessary safety studies that take time and money?  Eat on!  The FDA promises you are safe.  Do you feel safe in their protective hands?

Now back to the animal industry with dollar signs in their eyes over this new technology.  There is just one glitch—it is expensive to clone.

But fear not, they found workarounds.

Here is how this works, for example.  Let’s say a milk supplier has a prize cow that produces the most milk out of the herd.  She would be a prime candidate for cloning to generate a lineage of her cloned copies for maximum milk output.

Enter the breeder.  Let’s say there is a prize bull that always gets the job done, if you know what I mean.  He would be another prime candidate for cloning to create his lineage of cloned prize breeders.

Here’s where it gets even creepier…

These cloned copies that keep reproducing are not limited by natural lifespan.  If continuously cloned, the prize milker and prize breeder technically have the ability to live forever.

Given the fact that the FDA gave the green light for eating cloned animal meat and milk back in 2008 with absolutely no labeling requirements, what are the chances you have been eating genetically modified animal products for the past 12+ years…?

Now if that doesn’t give you pause, I don’t know what will.

The only hope for any consumer who wants to avoid cloned animal products is to appeal directly to the supplying businesses not to peddle such items.

What are your chances of halting the cloning industry at this point in the money-making game?  Slim to none.

In the meantime, if you plan on continuing to eat animal products, but are really turned off about eating cloned animals…  Or, if you are rightfully concerned about the long-term effects on your health from eating Frankenstein animal products, there is only ONE way to avoid the consumption of these genetically modified animal products…

YOU MUST GO ORGANIC!